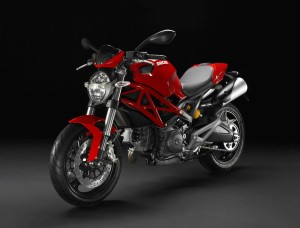 One of the biggest attributes of the 796 is its size. Not only does it weigh just 421 pounds (191kg) with a full 3.8 gallon tank of fuel, it offers a short seat height that measures 31.5 inches off the ground, giving a low center of gravity which makes it comfortable and easy to ride for any size rider. Furthermore, its narrow engine and steel-trellis chassis configuration add to its compactness which makes it the obvious choice for smaller riders.

The 796’s cockpit feels farely spacious, the wide handlebar make it effortless to flick the bike side to side on the twisties. The seat-to-footpeg relation is pretty roomy even if you are tall, I’m 6’2″, with the handlebar positioned low and forward to comlete the riding triangle, it is still a very comfortable riding positio compared to other bikes. Instrumentation consists of a small white-backlit LCD display that is easy to read day and night. The various functions including trip meters and ABS on/off functionality can be adjusted with the handlebar mounted button.

Thumb the starter button and the fuel-injected engine roars to life. At idle, the exhaust note has that classic Ducati growl which register around 80 dB, needles to say, a good aftermarket exaust make the bike really sing.  This Monster is the last one to use an air-cooled configuration measuring 803cc. (This motor can now be found on the Scrambler) It also utilizes simpler two-valve cylinder heads instead of the four-valve setup.

Right off idle, the Ducati Monster’s engine delivers superior torque. Only problem is that its tall drive sprocket gearing necessitates more clutch slip to get moving from a stop (the problem can be solved by a smaller 14T sprocket up front). Making matters worse is the toothpick-narrow engagement range of the hydraulic clutch not to mention how grabby and disconnected it feels from the engine. I did however appreciate how light the lever action is, compared to the previous models, as well as the back torque limiting feature during fast deceleration.

Even though the engine is cruder in terms of design it delivers healthy acceleration – enough to keep experienced riders occupied for a while, but not so much as to overwhelm a newer rider. At lower rpm you can feel how lean the engine runs with it surging forward when the throttle is initially cracked. The lean fuel condition eventually sorts itself out as rpms increase. Even still, the 796 is in need of a fuel injection re-map right off the showroom floor, or the added help from a power commander.

Looking at the dyno chart shows a dip in the torque curve. It starts out strong initially but falls off from 3000 to 4000 revs before regaining momentum again from 5500 rpm on. Horsepower the curve is much smoother than previous models.

The saying, “there is no replacement for displacement” unfortunately applies to the mid Monster, with the engine cranking out 87HP at 8250rpm and 58 lb-ft of torque, it might not be enough for some riders.  At low rpms the air-cooled mill vibrates substantially, which frankly is some of the appeal of the 796, but as rpms increase to around 6K it smooths out. The extra displacement hurt the Monster slightly at the fuel pump with it averaging slightly less, 35 MPG.

The engine’s versatile powerband works well with the gear ratios inside the transmission even with the tall final drive gearing. But the gearbox has a loose feel to it similar to all other Ducati street and sportbikes I have drove recently. There is some slop at the gear shift lever, requiring you to be assertive with it to avoid missing shifts. Neutral was also occasionally difficult to find at a stoplight and a few times when you found it the dash indicator failed to illuminate.

Dip the Monster into a corner and it steers with minimal effort. It almost feels like a scooter (good thing) in terms of how agile it is. This gives the rider confidence to zoom through traffic. At higher speeds the chassis delivers just the right amount of flex which allows the rider to get comfortable with the handling of the bike at speed. The suspension is definitely oriented for lighter and/or slower riders but still it provides an acceptable level of damping even when ridden aggressively. Overall ride quality is also good even on rough pavement. The Monster comes fitted with Pirelli Diablo Rosso tires (120/70-17 front and 180/55-17 rear) which complement the chassis well with plenty of grip for spirited canyon riding.

Braking hardware consists of twin 320mm diameter rotors that are squeezed by radial-mount Brembo four-piston calipers. The rear brake consists of a 245mm rotor with Brembo twin-piston caliper. Both brakes are powered through stainless-steel lines which ensures consistent and fade-free brake feel. One feature that the Ducati Monster offers is the ABS on both the front and rear brakes. By default the system can be disabled by navigating through the LCD menu system, but why would you.

In spite of the sloppy transmission, tall final drive gearing and vague-feeling clutch I still enjoyed riding the Ducati Monster. It’s a fun and easy to maneuver bike that carries some of the legendary characteristics of the Ducati brand including its charismatic air-cooled engine, with a low aggressive stance and a $9995 MSRP when it was new, you can find a good used one today for way less, this bike is a bargain to enter the world of exotic Italian bikes.